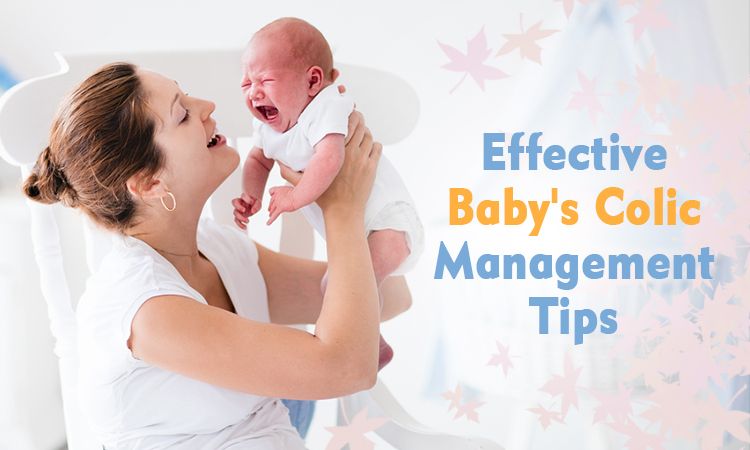 11 Ways to calm down colic baby

As new parents, you might be clueless as to why your usually cherubic baby looks very disturbed and begins crying uncontrollably for hours. It is dreadful to watch as your baby becomes overwhelmed with sudden outbursts of tears and wonder helplessly about the root cause.

According to doctors, during the first three months of an infant’s life, they can sadly be plagued with colic. Although colic sounds scary due to the uninterrupted nature of the baby’s wails, it is very common among infants and once you understand its concept, you will feel fully equipped to handle this child phenomenon.

We have endeavoured to answer all your queries in relation to colic, its symptoms and most importantly the ways that you can soothe a colic baby.

As the digestive system of a newborn baby is underdeveloped, it is highly sensitive to changes in the hormones and diet. This may lead to a baby experiencing pain in the gastrointestinal tract causing colic. The symptoms may start as early as 2 to 3 weeks andcharacterised by periods of continuous crying that last for around 3 hours. A colic baby may cry around the same time more than 3 days a week and this may continue for 3 whole weeks. Fortunately, colic symptoms usually stop when they touch six months of age.

Why do babies suffer from colic?

Experts have noted that about 8 to 40of babies turn colicky and it is evenly distributed among boys and girls, infants who breastfeed and are formula-fed, and first-borns or otherwise. One of the reasons is considered to be a temporary sensitivity in the gut to certain proteins and sugars found in breast milk and formula. It is also claimed that sensitive babies cry as a means to physically release stress. Also, mothers who smoke during pregnancy or suffer from postpartum depression will have babies more at risk of developing colic.

What are the symptoms of colic in babies?

Symptoms like a distended belly, apparent abdominal pain, irritability, and gassiness are observed in colic babies. The crying may sound more high-pitched than usual and may be unexpected (not due to hunger, tiredness, or a soiled diaper). Also, the inconsolable bouts of crying may turn their face red and flushed. When a baby clenches their fist, arches their back and pulls their knees towards their tummy while crying, these signs are indicative of distress caused by colic.

It may be difficult to watch your baby cry inconsolably without having a good understanding of the root cause. The usually long bouts of crying can make any parent feel very restless and desperate to help. We have mentioned some useful baby colic remedies that you can follow to soothe your young one efficiently.

A mother’s warmth and soothing touch is undoubtedly the best thing for a baby. During stressful times when a colic baby cries inconsolably, the best remedy could just be holding the infant close to you in a baby carrier and walking him outside if the weather permits. The warmth and love could calm his frayed senses and also aid in forming an intangible bond.

Music is long known to have therapeutic powers, more so with babies. It is one of the most trusted ways to lull your baby off to sleep. Singing lullabies to your little one will bring down his pacing heart rate and calm his senses. Mothers can serenade their infants or play soft music that they respond to during their bouts of colic crying. The effects of a lullaby or soft music, like classical music, have been researched extensively and the soothing sounds have been proven to positively affect the baby’s physiology and state of mind.

Being gassy is one of the reasons that causes discomfort in babies, making them cry until relieved on the pent-up gas. What you can do is lie him down on his back and gently move his legs in a circular motion as if pedalling a bike. Another way is to have him rest on his tummy and gently rub his back to motion the pent-up gas out of his body.

Again, babies witness a lot of movements in the womb, and they become accustomed to it. So much so that it calms them down making them feel safe again in the outside world. Therefore, some of the most effective baby colic remedies are as simple as taking him for a walk in the stroller, putting him on a swing, cradling him in your arms or a rocking chair and you can watch your little one doze off to sleep peacefully leaving behind the distressing howls of crying.

A distressed baby finds instant relief when he is held in a colic carry. To do so, hold the baby on your forearm as opposed to holding him upright. Position him in such a way that his belly is parallel to your arm with the head either resting on the palm of your hands or in the crook of your arm. The slight pressure on his tummy can relieve the colic baby of uncomfortable gas.

Home-made ingredients easily found in the kitchen have long come to the rescue of parents trying to soothe their colic babies. Asafoetida, known as, can be mixed with water to form a paste and be appliedthe baby’s navel and abdomen for a calming effect. The same method can be used with baking soda for a discernible change in the baby. Ingredients like raisins or ajwain orcan also be effective when boiled with water for 10 minutes. A few spoons of the strained liquid can be given to the baby regularly to notice an improvement in his colic symptoms.

What a baby consumes could be directly related to his colic symptoms. While you are breastfeeding, the intake of products such as dairy, caffeine, spicy foods, broccoli, garlic, cabbage, and onions may affect his colic. Try switching your diet devoid of these ingredients. If your baby is formula-fed, you should consult your paediatrician to check for soy-based, hypoallergenic, and pre-digested alternatives.

Giving your baby a massage can work wonders on him as the skin-to-skin contact will release the feel-good hormones and alleviate stress. A highly-stressed colic baby can significantly benefit from the mother’s soothing touch.

Babies are accustomed to swallowing air during feeding and rampant crying episodes. It causes them more discomfort and burping them will help release the pockets of air stuck in their digestive tracts. By gently rubbing their backs and tummy to let off pressure, you can calm down your baby’s colic symptoms.

As infants, babies have a strong sucking reflex and it produces a relaxing effect on them. Therefore, most colic babies stop crying when given a pacifier. As studies show, pacifiers are also beneficial in preventing sudden infant death syndrome (SIDS). Asafoetida orpossesses antibacterial and antiseptic benefits which can cure your baby of irritable bowel syndrome and tummy aches. Therefore, apply asafoetida to his fingernails and encourage the colic baby to suck on their little fingers by directing it to their mouth for relief.

To a baby, swaddling feels the same as being back in the womb. Therefore, new infants calm down instantly when swaddled. You can swaddle your baby till the age of 6 months when he is old enough to roll back on his own. When have mentioned a step-by-step guide on how to swaddle your baby.

Throughout this ordeal, remember that colic is a passing phase and do not play the blame game with yourself. When things get overwhelming, take a breather, run a hot bath or go for a walk to decompress. You can also enlist the help of your friends and relatives and take turns attending to your baby. Colic may disappear from your lives just as mysteriously as it arrived so you just have to be patient and withyou will have successfully dealt with the first challenge of parenthood.

Do keep the comments section interactive by sharing your personal experiences with your colic baby and what worked for you. We as a community can help each other learn and grow as parents and mothers.