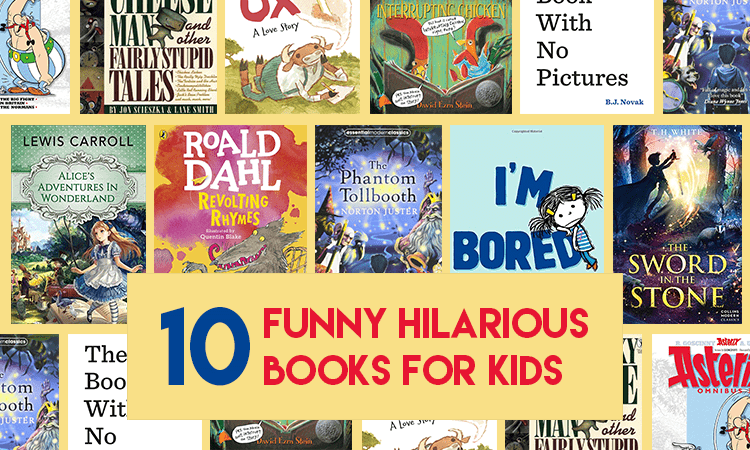 10 Hilarious Reads That Your Kids Will Surely Love

Can you remember your childhood and all the fun books that made you laugh through the years? Yes, that’s just how special children’s books are. Reading is a fun activity to engage in with your kid and of course, the added benefit of utilising the time spent together is always a plus.

So if you’re in a mood to have a good laugh with your little one, boy, do we have a laugh-out-loud treat for you! Kidmish has compiled for you a definitive list of 10 of the most legitimately funny books for kids that are sure to make you giggle, chortle and snort with laughter and get even the most reluctant readers (read hyperactive playful kids) engaged and engrossed in no time.

So grab your little one and find a comfortable place to sit and read, because your stomach will be aching with all the laughter that is to follow:

A funny book about bed-time reading, this book may actually just be too funny to read at bedtime. ‘Interrupting Chicken’ tells the story of a little chicken who wants her daddy to read her a bedtime story (sounds familiar?). However, she just cannot bear to hear about her favourite fairy tale characters make some really silly mistakes; so she interrupts and interrupts and then interrupts some more - in an attempt to rewrite the stories and create her own versions. This book shows us how kids can be an active participant in storytelling and make it more exciting as well as incredibly funny.

The Phantom Tollbooth by Norton Juster:

One of the best comic books of all times ‘The Phantom Tollbooth’ has been delighting kids and adults alike, for over 50 years now. Written as a whimsical tale about a boy who discovers the true power that lies behind our imagination, this funny book recounts some of the most bizarre destinations interspersed with some truly memorable characters.

Once Milo the protagonist, drives his toy car into the titular tollbooth, he discovers a world where rules disappear, all clichés become literal and rescuing the princesses Rhyme and Reason literally is of the essence. So get lost in an unparalleled world of play and fun, as Juster will make your funny bones tickle with delight.

In the world of fun books to read for children, Roald Dahl, is a name that must be included. In fact, one can just make a separate list to rank Dahl’s books, given the consistently hilarious worlds that he creates for kids to explore. Consisting of five fairy tales ‘Revolting Rhymes’ is one of his wittiest bests, with each tale ending with a twist, that subverts the original intended traditional moral of the stories.

For example, Snow White instead of meeting the seven dwarves ends up being teamed with seven jockeys, who are obsessed with betting on races. The humour in the book comes not only from the twists in the tale but also the way Dahl goes on to form his verses, which are definitely a delight to read.

Michael Ian Black is a famous comedian who has a lot of comedic shows under his belt and has added to it a list of funny children’s books too. Taking the age-old kid’s chant ‘I’m Bored’ (haven’t we all heard that!) he mines heaps of hilarity from forcing a child to confront it.

‘I’m Bored’ tells of a bored little girl, who is overjoyed to meet a talking potato, until he gives her a taste of her medicine and declares that “Kids are boring”. Determined to change his mind and to prove that it is not so, the girl takes it upon herself to change the spud’s mind. The book is a rib-tickling testament to the power that reverse psychology can wield!

The Adventures of Asterix by Rene Goscinny:

Most of us as kids have either read or heard about the famous comic series created by Rene Goscinny. Considered to be one of best funny books of all times, the USP of Asterix’s world lies in its use of wordplay and especially the way the characters have been named. For example, take the friends Asterix and Obelix (which are puns for asterisk and obelisk), their devout dog Dogmatix, the village chieftain Vitalstatistix and so on.

Apart from the puns, humour reigns aplenty in the books, with Asterix being the only sane level headed man, in a world surrounded by eccentric to certifiably mad characters. From the Romans who are dumb enough to get lined up to be punched by Obelix, to the sorriest bunch of pirates you’ll ever see, the comic illustrations are bound to make both you and your child giggle and chuckle with delight.

For the contemporary children’s literature world Jon Scieszka has perhaps some of the most fun books to read. ‘The Stinky Cheese Man’ is no exception to that. A collection of hilarious, twisted retellings of traditional tales, children who love fairy tales will definitely love this funny take.

From a prince who cheats by putting bowling bowl under the mattress for the girl that he loves in ‘The Princess and the Pea’ to the frog who makes the princess kiss him only to make her realise that he’s just a frog after all in ‘The Other Frog Prince’, the tales are a delight to read. Not only can you associate with the daring updated post-modern sensibilities of the tale, your kid will love the absurd hilariousness that the tales have to offer.

The title of the book itself is sure to get you chuckling (isn’t that always a good sign), but Rex and his illustrator, make the setup even more hilarious, by creating side-splitting imagery A poor love-stricken ox keeps writing letters to an increasingly exasperated (also conceited) Gazelle, and she keeps replying back, creating a lettering duel.

You can really max out a performance with this book, reading it aloud to your child in the voices of the Ox and the snooty gazelle and surely make your little one laugh with delight.

The Book with No Pictures by B.J. Novak

For the adults, B.J. Novak is best known for his perfectly timed comedy show ’The Office’ and his children’s book venture is another delight that popped off the writer’s head. Imagining a children’s book without any pictures or illustrations is hard, but you’ll soon enough know why Novak chose to do so.

“Here is how books work,” he says, “Everything the words say, the person reading the book has to say.” And it sure is a lot of fun, as Novak makes the reader do a lot of really silly things like make a “Ba-Dooongy Face!” Or proclaim “I am a monkey who taught myself to read.” The book is a novel concept and your kids are going to absolutely love you reading out and acting out the books whims and fancies.

The Sword in the Stone by T.H White

The famous legend of King Arthur and the sword have been retold various times in various ways and this funny book takes a unique take on it. Meet Arthur who is under the care of a gentleman named Sir Ector, a well-meaning, if not a slightly stupid knight. He meets Merlyn, a time travelling wizard, just when things start to look bleak for Arthur.

To train Arthur to become the king that he was destined to be Merlyn transforms him into a series of animals, just so that he can learn from the natural world. Merlyn and his owl Archimedes steal the show with their every changing hijinks and as the wizard travels through time, you will see him mentioning 20th-century events as an inside joke with the reader. You will have a whale of fun with your child, as you enact various characters and read out the episodes. This fun book is sure to keep your child thoroughly entertained.

Alice in Wonderland and Through the Looking Glass by Lewis Carroll

Last but not least, we have for you, the book that is synonymous with the absurd and hilarious fantasy world. From poetry to rhyme to characters like the Mad-Hatter or Tweedledee and Tweedledum, Lewis Carroll’s Alice in Wonderland and its sequel Through the Looking Glass are as good as the best comedy books for kids, that are out there. Interspersed with fantastic tales and some really quirky poetry like “You Are Old Father William” or the famous “Jabberwocky” this funny book is sure to take your child down a fun wild ride that is going to make him squeal with delight.

There you have it, our selection of the best comedy books that are sure to keep you and your child entertained, as you read out wild tales of fun and adventures with humour erupting out of the pages. So go ahead and buy yourself these fun books and let the magical reading time begin! And while you’re at it, don’t forget to subscribe to our newsletter as we bring to you a host of other fun reads.

Until then Happy Reading!